Hey everyone,
My grandPAW and mom took my foster sister Firefox to the eye doctor today.

They did not get good news.

Firefox can't see very well, and it's only going to get worse.

Here's my mom, giving the details:

"Little Firefox had her appointment with the ophthalmologist today. For those who don't know her history, she was a stray in CT, animal control contacted us for help with her. I think she arrived here about a month and a half ago.

One of the things I noticed about her right away was that while she would chase madly after a toy, it is stopped before she got it, she would hunt and hunt, but wouldn't be able to find it.

I also began noticing that her eyes constantly were "glowing" or reflecting back in almost all types of light, not just when getting her picture taken.

Finally, we noticed that her eyes were always very dilated, even when the other dogs pupils were not.

I asked my vet to take a closer look at her eyes when she went in for her spay, which she did and she couldn't tell if her eyes were just like that with no problem, or if there was something going on. So, she gave us a referral to the ophthalmologist and it took a while to get in.

Anyway, Dr. Mineo took a close look at her eyes and it turns out that yes, all those signs were pointing to something after all. Both of her eyes have severe retinal degeneration in them. The right one is worst, with her not even being able to see any blood vessels in the back of the eye. In the left eye, she can still see a few. When she looked in her eyes, where she should be able to see the main nerve in the back, she sees a black hole instead!

She didn't give it an official name. But it's retinal degeneration and it will progress until she loses her vision completely. It's unlikely she has much right now, really, particularly in her right eye. She could say for sure why - she felt she was too young to have such an advanced case of typical PRA, but that perhaps she didn't have normal development to begin with so when the PRA kicked in, it took less time for the eyes to degenerate to the point they are now.

So, bottom line, she has limited vision which will progress to total blindness at some point in her future. There is no treatment or cure, but it is not painful in anyway. It's progresses slowly enough that the dogs are able to adapt very well. There is no way to know how long it will take before she is completely blind, and due to the adaptability of dogs, you may never realize when she has lost all vision.
In her typical fashion, she charmed everyone she met. She bumbed into the glass doors on the way out, definitely did not see them."

Really, though - if the doors are clear how was she supposed to see them even if she had good eyes. Here's a picture of her! She's cute, huh??? 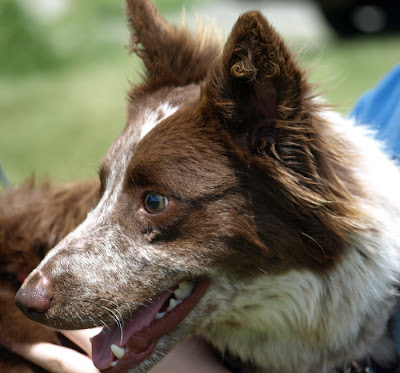 Well, I gotta go! But I'll be back!
ArthurAwesome!