That got her attention!

Well, my mom said I've been neglecting my duties updating this here blog, so I better get on here and tell you people about my brother Dust, first.

His reports came back and mom was REALLY happy that he did not have Cancer. I don't know who Cancer is, but I guess it's a good thing he doesn't have him. His lumps are almost all gone, too! He has to take a bunch of pills everyday, 4 to make the lumps go away, 2 to help his thyroid, 3 to make him not hurt. It's h*ll getting old, he says. And if that wasn't bad enough, Saga wouldn't get off his bed the other day and when Dust tried to tell him to, Saga got mad. That's never happened before.

But, Saga got his, because that annoying foster dog forgot to hold a toy in his mouth and instead he put his tooth in Saga's head! And scraped it over his nose! So, Saga looks weird too. Then mom cut all his hair off his legs and bum, so he looks even sillier. She said he was making mats. I know what mats are - I'm really good at going and lying on them, and I can tell you he didn't have any made on him that I could see. Mom's are so weird!

My fun foster sibling, Sparkle, hasn't been allowed to play with us for a whole week. Mom says it's because she had to get fixed, but I didn't think she was broken before! Hopefully, she'll get to play soon!

This is me being totally bored! 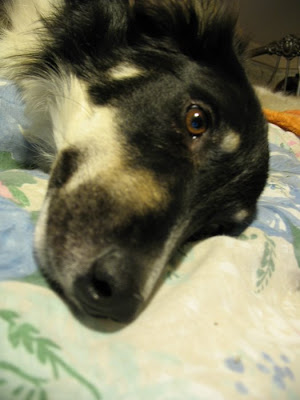 I was getting annoyed with mom my busy and neglecting me! So today, when didn't come outside to play with me after dinner, I stayed on the deck and moped. Then she let us in, and I came in. THEN, I remembered I still hadta go potty. I *really* had to go, so I didn't go to the door and ring my bell, I just started to go right where I was . . .

THAT sure got her attention. HA!