Here's what mom, me, my little sister Dally, and my little brother Elliot Cool did today!  They did ok, but I did *awesome*! 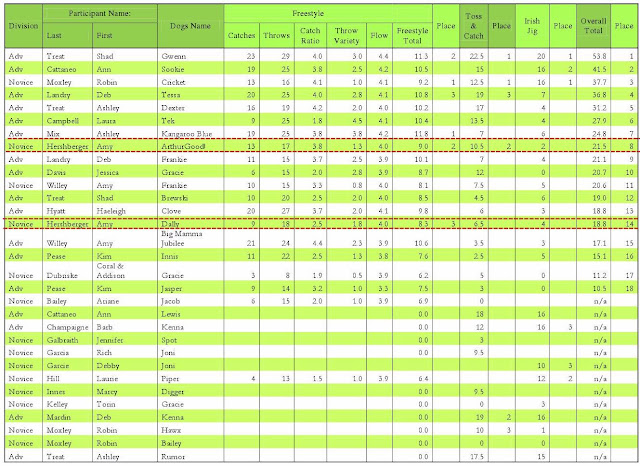 ps - someone asked about the Irish Jig - mom was terrible at that.  She forgot how to throw the Disc at all!

Here is the description: "Irish Jig - Competitors are allowed 60 seconds to complete the fast-paced event in which teams attempt to score points by completing as many catches as possible within various scoring zones in the time allotted. Scoring zones and field dimensions are depicted in the graphic below.
The thrower and canine are required to be behind the throwing line before time starts. When the competitor is ready, the line judge will signal the announcer by raising an arm. Soon after, a start cue will be given by the announcer indicating that time has begun. If, in the opinion of the line judge, the dog leaves before time begins, time will be reset to zero and a restart will be initiated. Competitors may send their canines downfield, or throw, any time after the start signal.
The thrower must always throw from behind the throwing line and between the throwing line cones, but may move freely around the field at other times. A throw will not be scored if the thrower steps on or over the throwing line prior to or during the release of the disc (foot fault). If the disc leaves the thrower’s hand before time is called, the throw will be scored if caught by the canine inbounds.
For the throws must be by area number…as in hopscotch…. Area 1 is the first throw, then area 2, then area 3 and so forth. If the team has enough time, once they have gone through all areas, they must work their way backwards through the areas. Meaning if the team makes it to box 7, then the next area to be thrown to is area 6, then area 5, and so forth.
If the team misses an area at any time, they must continue on…missing those points for that area." 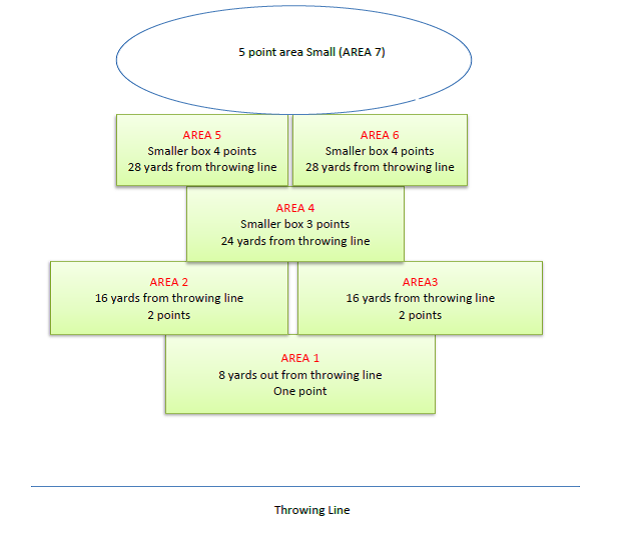